Posted at 07:00h in Winepedia by Cecilia Lee
0 Likes
Share 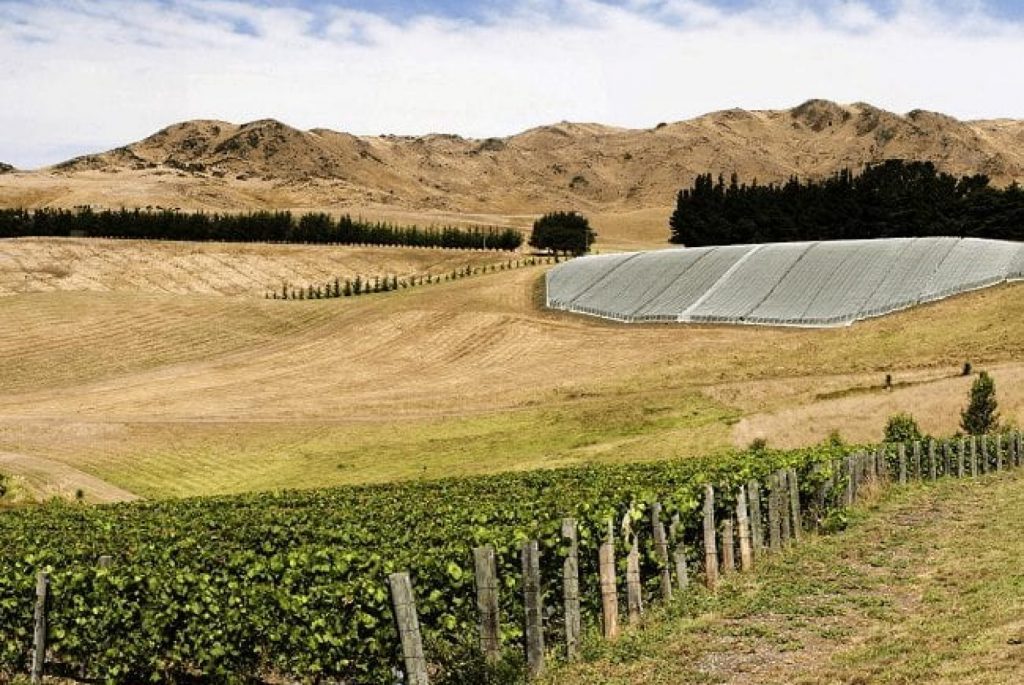 An American couple’s chosen this unique site in Canterbury to make world-class wine.

Claudia: “You know we took the old world model and brought it to the new world, this wine tastes like wine from nowhere else in New Zealand; nowhere else in the world and that’s precisely what we set out to do.”

Mike: “It’s always a risk, it’s farming you just can’t control mother nature and you’ve got one chance every year to get it right.”

At Pyramid Valley Vineyard in North Canterbury they do things the traditional European way and that takes a lot of people power.

Claudia: “We’ve got a team about 10 people here today we’re just shoot positioning and lateral thinning. They’re going through with snips or with using just their hands and pulling off the laterals like you do with your tomatoes, and that’s exposing the fruit to wind air sunlight everything moving through to prevent disease from happening.”

Claudia and Mike Weersing have their own way of doing things, they’ve planted their grapes close together and low to the ground in the French style and it’s taken some kiwi ingenuity to ease the backbreaking work.

Claudia: “When you have vines that are so low to the ground, it was really hard for us to constantly be bending over. So we’ve kind of over the years created these trolleys, we started with skateboards which was kind of funny, but they’re not great when you’ve got muddy soil so we came up with these aluminium frames — everybody grabs a pad and you can sit on that really comfortably. There’s no back injury and it also brings you into the fruit zone, it brings you right against that fruit and that canopy so that you could have a really close look at what you’re doing and feel more comfortable about doing it.”

Claudia: “Fruit sets just really in balance, yeah it’s probably a little bit more meticulous than what you would see in a normal vineyard but we’re aiming for quality here and we’re aiming for a very low yield and we can’t take any risks on detritus so we’ve really got to get it right the first time.”

Claudia: “Everyone here at Pyramids are part of our family and I think that’s one of the nice things when you come to Pyramids there’s that people talk about the energy here and it feels like home and it’s a place that we share and we’ve shared from the beginning. And mike and I didn’t have kids so it’s really nice to see the next generation thinking about viticulture and what’s here for them. It’s wonderful.”

Claudia and Mike have established their vineyard using biodynamic principles which focus on creating healthy soils.

Mike: “Well we know for a fact that in a vineyard ninety percent of the biomass is from the soil surface down. We see a vineyard as being what’s up in our part of the universe up here, but if you get your 90 percent wrong your 10 percent is never going to be what it should be. It’s like asking to have lustrous hair on a corpse, so you farm your soil first and we we found our soil first and now we farm it and the vine just happily follows along. You know we’ve made mistakes along the way but biodynamics is something we would never take back and we would never abandon.”

Claudia: “So this is fresh manure I collected this morning and we’re just going to put a little bit into the horn like that and then we’re going to use our stick to push it in. I just use my fingers because I don’t worry about it you’ll be eating lunch with your forks and not your hands today.

Claudia: “This is six months on so what I’ve got here is this incredible compost. It’s got more microbial life to it than you’d ever find in a compost. We then put this into a drum, we stir it for about an hour with a stick and we put it into the sprayer and then we spray it onto the land just like you would a normal fertilizer. It’s really the magic of biodynamics this is just feeding the soil you know, looking after the land caring for the land and this just keeps everything alive and everything going.”

Vineyard manager Stuart McDuff has adapted to using biodynamics too.

Stuart: “The only word that’s guaranteed to get you fired around here is weed killer. And it is it’s just something all of our weeding done by hand. There are times honestly where the crew would just love to get out there with the weed killer because it’s not a flash job but it’s a great environment. It’s the people basically, it’s a good place to work and it’s a hell of an office, it really is.”

Claudia and Mike moved from California 18 years ago following a dream to create a wine unique to the site.

Claudia: “It’s funny when we first met each other, he used to have his nose and a Pinot Noir book every single night and I thought oh this guy’s having an affair with Pinot Noir you know, it was kind of weird but um I got attached pretty quickly. There’s something really special about being in the wine industry and I felt like this was a really good direction for myself.”

Mike: “It’s so lifted this year, it’s so violent, it’s really pretty. This wine tastes like wine from nowhere else, nowhere else in New Zealand, nowhere else in the world and that’s precisely what we set out to do I can’t imagine wishing to be anywhere else.”

Their love for the land has seen them turn a former swamp paddock into an irrigation pond and native wetland.

Mike: “So we had to do was simply dig it out like a swimming pool essentially. And then because our clays swell when they get wet it lined itself and it filled itself. Of course all the neighbors were laughing saying those crazy Americans, they’re digging this gigantic hole and it’s never going to fill. But we had one big rainstorm in the winter and it was full.”

But the Weersings needed a solution to deal with algae and weed that could take over the pond.

Claudia: “With the challenges of having the pond, we knew that we needed a management system and we needed to find someone to do that for us and that’s when we came across Gray. He drives all the way from Takapuna down here and we catch up with him about four times a year. He checks on the pond and make sure the levels of the algae aren’t getting out of control.”

Gray: “We use grass gap to eat the weed and the filamentous algae, and silver carp to filter out blue-green algal blooms. I just wanted to show you this time the silver cup they’re now in size. So oh right that’s the silver carp, we’ve had the grass carpet in the past but this is the first time that we’ve actually put the silvers, and the silvers now are of size and they’re the ones that are going to swim around in the water and filter feed out all the algal blooms, so the water will start to go clear. One of the biggest issues we have putting them in different places is that they’re confused with the koi carp, silver carp and grass carp aren’t that at all we we’ve actually changed the name to white and silver and muir they can’t breed in New Zealand that’s been proven and they can be easily managed i mean you look at a pond the same as you look at the amount of stock you put in a paddock you work out your stocking rate and then you put them in and you just adjust it to suit. Well here they are,  here’s the first of the silvers to be released in here. They’ll probably go about 10 kilos minimum, they could even get as much as 18 to 20. Also the freshwater mussels they filter feed on blue algal bloom, they’ve got toxic blue green algal blooms as well. That’ll take a couple years to build up the numbers but then it will actually turn your water clear. Well what we’ll do when we put them out is we try and keep them together so that when they spawn, it’s easy for them to fertilize each other so we’re just going to chuck them out in the water.”

Mike: “He’s so committed to what he does. And he really does believe that there’s much we can do to help clean so many polluted waterways in this country that if it requires a non-native carp to do so and there’s no danger in releasing it that seems a better way than many.”

The pond may be getting cleaner but with some of the jobs around here you’ve got to get your hands dirty.

Vineyard worker: “It’s not as bad as I thought.”

Mike: “The farm is 200 acres, we only have two hectares five acres planted. We wanted to concentrate on just the areas that had the correct soil mix and the right sort of aspect. We have four different blocks, two of pinot and two of chardonnay in those two hectares. To be perfectly frank we haven’t even planted our best ground yet because I didn’t want to make mistakes on what I considered to be the very best plots.”

A specific soil type is at the heart of this vineyard.

Mike: “The soils are a mix of clay and limestone that’s very important. … full content could be viewed in below video clip.

The Cellar of Claudia Elze and Mike Weersing