The resolve of the wine industry is being tested. Following an uncertain start to the year, the global health crisis descended on an already-unsteady fine-wine market, forcing a complete halt in business for the on-trade, while the off-trade scrambled to come up with contingency plans to sell and deliver wine with new, “Covid-safe” procedures. Over half-way through the year, the picture is far from bright for restaurants and bars, but off-premise sales offer a glimmer of hope.

After falling 2.5 percent between January and April, the Liv-ex 1,000 index bounced back in the latter months of H1 2020 (fig.1). Also gaining ground lost at the start of the year, and following seven consecutive months of decline, the Liv-ex 50 index (made up of Bordeaux first growths) experienced a positive pivot, rising 3 percent between March and June. The Bordeaux-dominant Liv-ex 100 index continued its downward trend, dropping 2 percent over the first half of 2020. 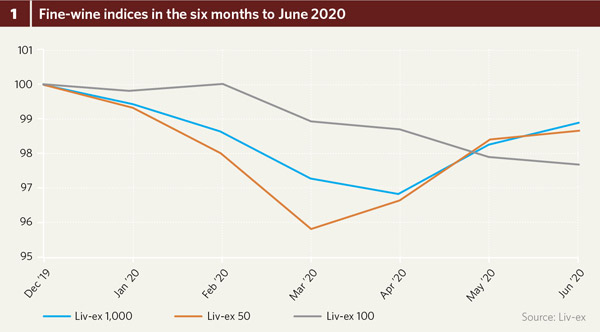 In regional terms, the Bordeaux Legends 50 index finished H1 2020 where it began in January, and the Bordeaux 500 index fell half a percent short of the same (fig.2). Matthew O’Connell, Head of Investment at BI Fine Wines, qualifies their fluctuation within the context of this year’s Bordeaux en primeur campaign: “Prices were 25 percent down on average—even more for some of the biggest names”. Release prices slashed to gain traction amid the pandemic nevertheless came with a trade-off: a widespread reduction by the châteaux of volumes brought to market. “Fewer customers were able to get hold of the brilliant, and brilliantly-priced wines,” he explains, adding, “In many cases, we had demand five times higher than our available allocations.” 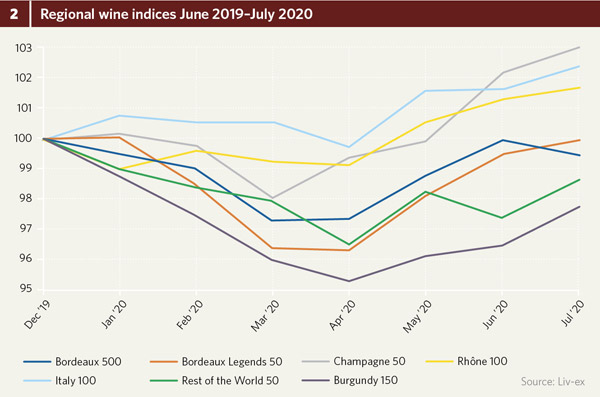 While the combination of attractive prices and high demand caused heavy secondary market trading of Bordeaux 2019s, its impact appears short-lived—the region’s Liv-ex trade share percentage declined further through the first half of 2020, reaching an all-time low of 46 percent by the end of July (fig.3). 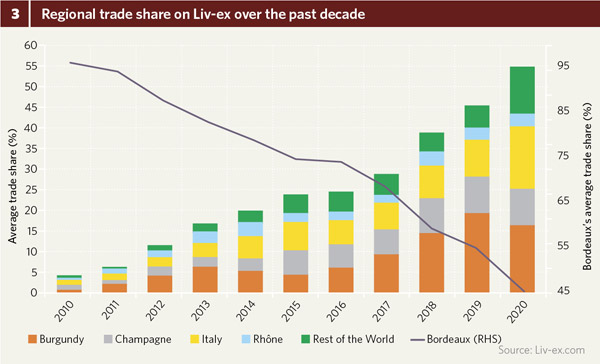 Burgundy, too, falls victim to the pandemic, its regional index falling 2 percent in the first six months of the year. While showing signs of a faster recovery by July, it was Liv-ex’s worst regional performer in H1 2020—a consequence of sky-high prices having further to fall during harder times. Less expensive wines from outside the two traditional French fine-wine regions fared better. Despite a reported 33 percent decrease in global sales of Champagne, Liv-ex’s Champagne 50 index is the best regional performer of the year so far, rising by 2 percent between January and June 2020. The Rhône and Italy 100 indices also performed well.

The same cannot be said for Hong Kong. The pandemic, plus political turmoil, has taken its toll on business, particularly given the city’s strong on-trade focus. Bordeaux continues to trend downward: “HK cellars are full of Bordeaux,” says Thibaut Mathieu, Managing Director of Corney & Barrow Hong Kong. “It’s hard to offer mature Bordeaux to an HK collector who is probably sitting on hundreds of clarets, bought while en primeur was still hot,” he continues. Burgundy nonetheless still holds its trade share in volume, albeit at “a more affordable price point” for immediate consumption at home.

Uncertainty for the future generated by the health crisis has translated into thriftier purchases across fine-wine markets. While this does mean a decrease in average sale prices per bottle, the positive takeaway is volume. Indeed, Corney & Barrow’s Hong Kong business for home delivery “has picked up significantly.” “We are selling two to three times more than last year,” Mathieu explains. Tom Harrow, Managing Director of Honest Grapes, echoes a similar sentiment for the UK, with business “operating at a level between 1.5 and double our normal Christmas period since lockdown.”

By contrast, the spring live-auction season of 2020 was understandably quiet, with fully operational physical auctions an impossibility for much of the second quarter. Live-auction revenues in the first half of the year reached an unprecedented low of $124 million, down 48 percent on H1 2019 (fig.4). The total number of lots offered saw a smaller reduction (36 percent), meaning a 20 percent decrease in average value per lot ($3,204 in H1 2020 vs. $4,008 in H1 2019). Geographically, the Hong Kong auction scene has been the hardest hit of major wine cities, its live sales experiencing a near-70 percent drop in value compared with January to June 2019. 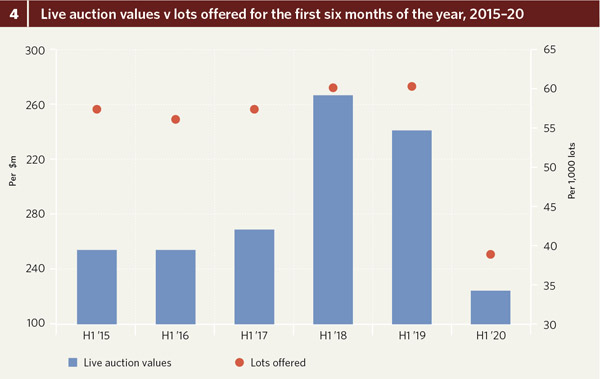 But while the gavel in Asia was less active during the first six months of the year, its customers were not. Private Chinese buyers were responsible for the highest bids in live auctions conducted by American houses, as well as proving their ongoing thirst for fine wine in several online-only auctions.

The US earned a 67 percent share of global live-auction revenues from January to June 2020. Front-runner Acker Merrall & Condit exceeded its H1 figures on the same period last year, generating $46.6m from live and live-streamed sales (fig.5). Following a well-timed introduction of online-only sales in September 2019, a further $8.6m from digital auctions brings Acker’s H1 2020 total to $55.2m. Zachys also adapted quickly to customers stuck at their computers, arriving “first out of the gate” with its Studio Sales—auctions streamed online with a live auctioneer and online bidding.

In NZ we are also experiencing strong online sales which provide our vendors with that extra confidence when they hand their wines to The Wine Auction Room. 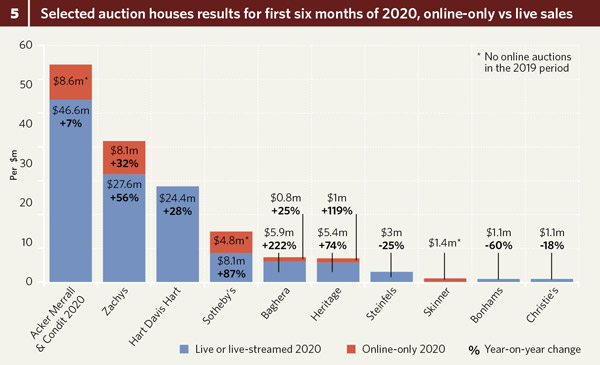 Further success stories of 2020 are found beyond the traditional hubs. The impressive performances of Baghera (Geneva), Heritage (Los Angeles), and Skinner (Boston) compared to the same period in 2019 suggest decentralized trade, linked not only to a requirement for activity closer to home during the pandemic, but also through wider use of online resources for fine-wine buying internationally. Indeed, the digital pivot has already proved of higher importance this year than ever before. With the exception of Christie’s, every major live auction house also offering online-only auctions grew their digital revenues in the first half of 2020 compared with the same period last year, to the collective tune of $26m (a surge of 21 percent).

Online-only auctions still garner lower top-lot prices than their live counterparts, but their upswing in value during the pandemic-ridden months of 2020 relative to 2019 is astounding. The average winning bid value of digital wine auctions in H1 2019 was $4,500, but $17,000 in H1 2020 (an increase of more than 270 percent).

Though 2020’s global auction value thus far is a far cry from the dizzy heights of H1 in 2019 and 2018, the market has shown encouraging signs not only of continued activity and the strategic agility to facilitate it, but also generosity. Auction houses sprung to the aid of the hard-hit on-trade and health charities. Zachys teamed up with Union Square Hospitality Group, raising funds for unemployment relief through the sale of rare wines from its restaurants’ cellars. French online auction platform, iDealWine, received donations from more than 100 Bordeaux châteaux, generating €134,600 for medical charity Protège Ton Soignant. WineBid—the world’s largest online auction platform—also arranged a charity sale, with proceeds going to the Restaurant Workers’ Community Foundation Covid-19 Relief Fund.

In addition to its generous support for an industry in need, WineBid also saw an all-time high in bidding traffic. CEO Russ Mann is optimistic about the permanent changes that 2020 will have brought to fine-wine buying behavior. “Within a $325 billion industry, online wine sales have thus far penetrated as far as c.$10 billion—just 3 percent,” he explains. “I think the pandemic has generated in three to five months the same progression for the industry as we’ve seen during the previous three to five years.” WineBid itself has had systems in place to replicate the physical elements of a live auction for many years. It possesses technology for 360° examination of bottles through hi-res photography, as well as fast-paced “e-bay style” bidding on a weekly cycle, recreating the excitement of a live auction room.

Perhaps a silver lining of this difficult year, therefore, is an openness to buying differently, and from farther afield. Worldwide Head of Sotheby’s Wine, Jamie Ritchie, explains thus: “Whether live or online, out of Hong Kong, New York, or London, our sales this year have proven that the appetite for wine transcends geographical boundaries, as collectors across different time zones are prepared to place their winning bids by any means.” True to this, and despite the ongoing political unrest, Hong Kong showed early signs of some upturn in July. Sotheby’s rescheduled season of spring sales in the city generated $23m, its three-day auction series becoming the third highest-value wine-sales series ever in Asia. Christie’s first live sale of the year also took place in Hong Kong, resulting in “very strong market response,” and a final sale value of $5.5m. Other big players have plans to make up for lost ground through the autumn. After its “busiest June ever,” Zachys is set for an exciting Fall season, including its inaugural European sale—the auction of wine from three-Michelin-starred Florence restaurant Enoteca Pinchiorri.

Through these challenging months the fine-wine industry has shown resilience, and its customers, loyalty, with both parties adapting to the “new normal” without compromising the pursuit of their mutual passion. London-based private members’ club, 67 Pall Mall, reacted quickly and creatively, replacing the physical space of its tasting rooms with a “virtual” membership. The shift saw live tastings conducted through Zoom, for which participants received “tasting packs” in advance, complete with tasting mat, storage, and serving instructions, thermometer, and 75ml samples of the wines. Merchants, too, leaned into their screens, increasing digital activity through video-led tastings. Tom Harrow, Director of Honest Grapes, is delighted with customer-engagement levels achieved over the past few months. “We really grabbed the medium of video by the horns, moving our entire events program online very early into lockdown.” Appetite for online tastings has continued, albeit “a little less frequently, as visits to bars and restaurants become possible again.” The months of lockdown ended on a positive note for Berry Bros & Rudd, too, with BBX seeing its number of monthly trades increase by 15 to 20 percent, and “more active buyers and sellers each month.”

With the world slowly re-opening, it will be interesting to see how the industry’s new digital advances develop. Old habits die hard, but as the coronavirus dust settles—complete with a global recession and an unemployment crisis—so loom once again the longer-standing political threats entrenched before this unprecedented year began: Brexit, US tariffs on wine, Hong Kong’s national security law. Now is the time for all those interested in fine wine to fasten their seatbelts—there may well be a bumpy ride ahead.